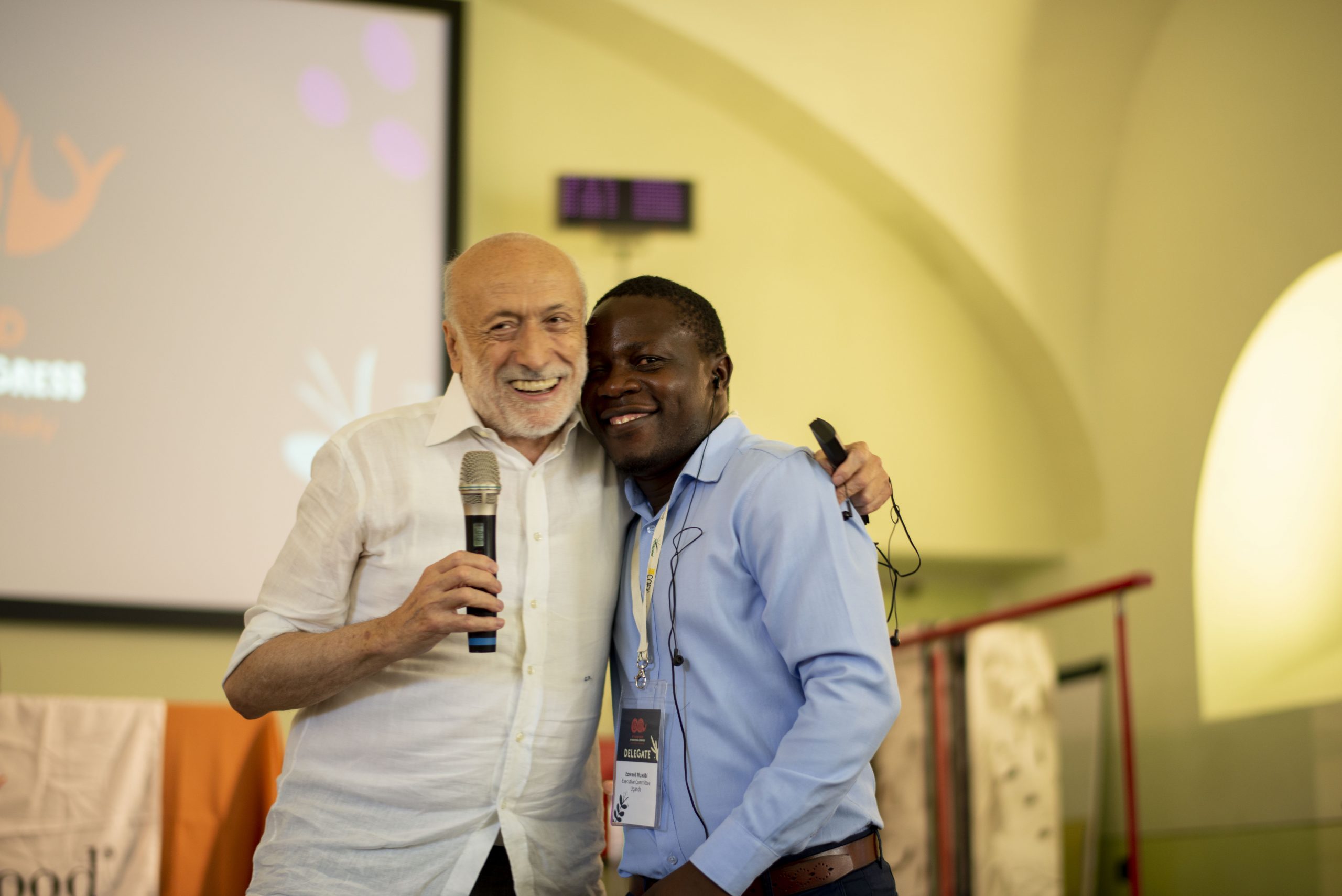 In this Earth Dialog I speak to a man who came to Terra Madre Salone del Gusto for the first time in 2008, as a delegate of his country: Uganda. In 2014 he became Vice-President of Slow Food and, in July of this year, the President of our movement: Edward Mukiibi.

Carlo Petrini: you’ve been a leader of the Slow Food network for many years, taking a leading role for the Gardens in Africa project, as well as the development of the Slow Food network in Uganda. Beyond your degree in agronomy you’ve also done a Master’s degree at our University of Gastronomic Sciences in Pollenzo, established in 2004, the same year that the Terra Madre network was united for the first time in Turin. That is to say, you understand and reflect the philosophy and the missions of the projects closest to my heart. Now you’re about to live your first edition of Terra Madre Salone del Gusto as President of Slow Food, how do you feel?

Edward Mukiibi: I studied agronomy at university, though I learned most of what I know from farmers. Many multinational companies have bought up hectares of land to use for industrial agriculture, lands they bought below cost. Going around rural villages I’ve seen that these intensive systems, the same kind taught by my professors, could not work for small-scale producers. And that’s how I started a project to recover local seed varieties, raising awareness among farmers of their value.

In carrying out these activities I came into contact with the Terra Madre community and was invited to take part in one of their meetings. My first time in Turin was in 2008, where I found a great international to share my problems and ideas with. I understood that we grow food by taking care of the planet and ourselves, too. We need to rebuild an Earth destroyed by industrial food. We must preserve the biodiversity which Africa has so much of. There is still famine in Africa, but the right to good, clean and fair food is universal.

Regarding the next edition of Terra Madre Salone del Gusto, I’m excited by the fact that after four years we’ll finally be able to reunite physically in Turin. Being a hybrid event it will involve people who cannot come to Turin, as well as the new Board of Slow Food International, which will make its public debut. As President, but even more so as a food producer from Africa, I will show the determination and steel required to make our commitment to regeneration tangible in all the activities over the five days of the event. We’re talking about an urgent change, a process which we should have started many years ago.

Edward Mukiibi is taking part in a number of activities at Terra Madre.

Thursday, September 22 at 3 p.m. at the Berta Càceres Arena, Mukiibi will be taking part, with Giuseppe Lavazza, in a meeting about the Slow Food Coffee Coalition, the worldwide network bringing together actors throughout the value chain, from producers to consumers, for good, clean and fair coffee.

Also on September 22, at 5 p.m., Mukiibi will be speaking alongside Carlo Petrini at the conference The Regeneration We Need. Places for the physical conference are already sold out, but it will be available to view on the Terra Madre website the day after the event.

In the face of political inertia regarding the climate crisis, we must take action

In the next edition of Terra Madre Salone del Gusto, which is also held on the eve of elections in Italy, the message of regeneration that I want to share is that, in the face of political inertia regarding the climate crisis, we must take action, and encouraging the consumption of local, seasonal food to improve the food sovereignty of communities and, at the same time, minimize our environmental impact.

Reducing our consumption of animal protein, especially in the Global North, where it’s the cause of massive environmental damage, as well damage to human health through the increased prevalence of heart disease, diabetes and obesity. Reducing single-use plastics. Ending food waste. Drastically cutting our consumption of ultra-processed food: junk food rich in calories but nutritionally-poor, that multinationals sell us as artificially-low prices, making it even more appealing to people with low incomes.

Edward Mukiibi: The climate crisis is clear for all to see, as is the suffering of the people around the world. Take the phenomenon of food waste: with the growing worldwide drought it’s criminal to waste resources. It means denying people access to a good as essential as water, and ignoring those who still suffer from hunger. It’s more important than ever to talk about regeneration putting food at the center and give the right importance to the good practices we can put into motion.

It’s important to discuss the benefits of adopting a regenerative approach: permaculture, regenerative agriculture, agroecology… they’re all methods that encourage biodiversity, revitalizing the soil and creating microclimates that are able to resist adverse climatic events. Then there are the virtuous examples of those communities who use food to rebuild local economies, restore ecosystems and build peace through swapping seeds, ideas and recipes. Working with food allows us to recognize ourselves as part of a common project, and to establish relationships that go beyond geography and ideology.

Regeneration is a responsibility which we all have, no matter our social or cultural background. Everyone has a role to play, starting with food; this vital element which brings together all living beings and which can have an enormous impact on this process of restoring our planet to health. We must act urgently, above all if we’re young. Everything that’s happening regards us directly and for this reason we must take a central role in this process of change and the promotion of more sustainable lifestyles and diets.

We need a different system

Carlo Petrini: The signal that Slow Food has wanted to give with your election is to be a truly international movement, able to overcome Euro-centric, Western logic that is both morally wrong and deeply harmful. For decades, in the name of globalization, we’ve built food chains that stretch across the entire world. The problem is that this process hasn’t been democratic or inclusive: We’ve built a system based on profit, on multinational corporations and on very few measures to support poor people. That’s before we speak of the extreme responsibility for the environment and the denial of fundamental human rights.

Today food production is held hostage by shameful financial speculation which raises prices and poses a serious threat to food security, above all in the countries which we’ve made dependent on humanitarian aid, or that we’ve convinced to buy food from abroad because it was more convenient than producing locally. We need a different system; one based on the principles of human dignity and sovereignty in all areas of the world.

With Slow Food we’ve already made this philosophy reality through the nearly 4000 gardens in Africa through which we revitalize local economies, allowing people to cultivate biodiversity and eat fresh, local food. A project that wasn’t made possible by the presence of Europeans, but thanks to the network of African communities. Analogously, the redemption of countries in the Global South cannot be achieved through the actions of European and Americans, but by local leaders; it is a matter of justice and fraternity.

Edward Mukibbi: a national strategy for agroecology in Uganda

Edward Mukiibi: We all have a right to good, clean and fair food no matter where we were born or where we live. To emphasize this right authoritatively and in all its universality, it is important to invest in the training of people. Creating new leaders capable of demanding change is an essential step in the regeneration process, all the more so in a continent like Africa, a land of monocultures, GMOs, land grabbing and more generally of resource overexploitation by wealthy outside investors who strike deals with African rulers.

Africa is undoubtedly a continent full of challenges, but also many opportunities given the young population and their desire to emancipate themselves from old colonialist dynamics. For example, producer communities are claiming their right to land access. They demand an end to monocultures and the preservation of biodiversity, being aware that it is an important reservoir of solutions to draw on in adverse climatic circumstances. All of this needs trained leaders capable of intercepting these demands and amplifying them forging alliances and providing local solutions to global problems.

It is important that we’re able to engage with politicians as well, informing them of the existence of alternative solutions to the conventional agriculture being practices worldwide by foreign multinationals. Uganda, for example, after much advocacy work, is now developing a national strategy for agroecology. This young African generation is committed to a better future; it just needs to be empowered.

The Earth Dialog between Carlo Petrini and Edward Mukiibi was published in La Stampa on September 1.

Terra Madre Salone del Gusto is in Parco Dora, Turin, from September 22-26, 2022, with over 600 exhibitors and a series of workshops, conferences and tastings that show how we can regenerate our planet through food. #TerraMadre2022 is a Slow Food event. Free entry!