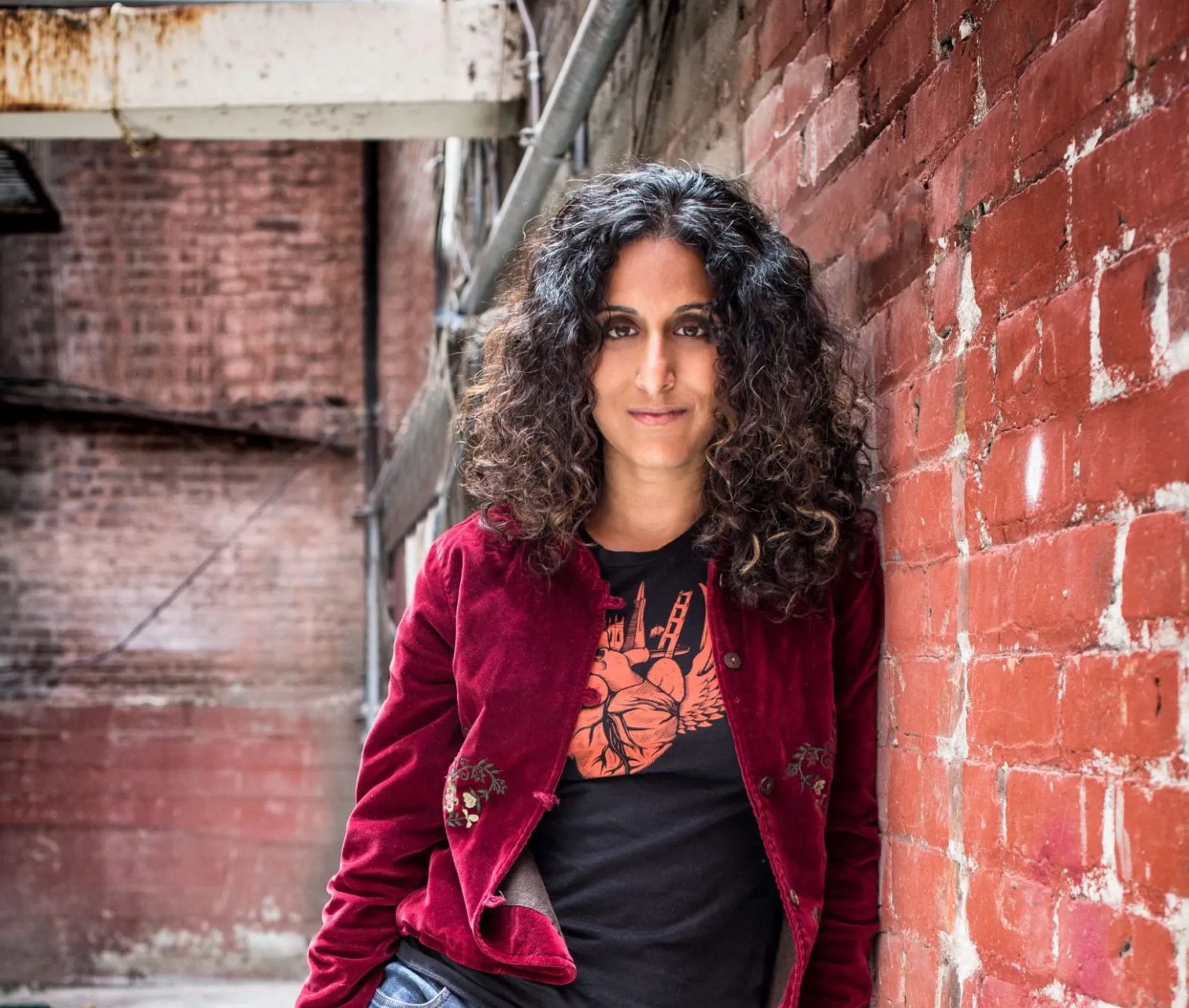 Decolonizing our food through deep medicine, with Rupa Marya

How can we make a difference in the world through our daily actions? That’s the focus of our conference You, Me, Us, on September 24.

To start building an idea of some of the different strategies that communities are adopting around the world we spoke to one of our conference guests, Rupa Marya, doctor at the University of California. She’s a proponent of deep medicine, a decolonizing approach that seeks to reestablish healthy bonds with the Earth and other humans.

Slow Food: Do you have any particular early memories of food that come to mind?

Rupa Marya: I grew up as a daughter of Punjabi immigrants, and probably my fondest memories of food are of my Dad cooking. He was an incredible cook and every evening the house would smell so delicious and would just carry all these scents of my ancestors and all these smells that were unfamiliar in Mountain Dew, California, where I was born, far away from my ancestral homelands. My father was a reticent man, and he expressed his love through cooking. So I always felt loved and connected to a long line of my heritage through food.

When did you first realize how political food was?

Well, it started when I was a child and we’d go stay with our grandparents in India. Being a child and seeing other children starving in the streets, it became clear to me that there were political choices that were determining that I should have enough food on my plate and that another child should be outside and have none. It was clear to me that this was a manufactured scarcity, and that the division between haves and have-nots in India, as my father used to say, wasn’t a thing of the past, but would be the future of places like the United States.

You’ve talked about there being Enlightenment-era errors that that structure our food system.

The most damaging error situates humanity outside the web of life. Lots of Enlightenment-era thinkers deemed progress to be the domination of the web of life to extract what we want and discard what we don’t. These ideas form the foundation of European conquest, not only of its own women and subjugation of its own subaltern classes, but also the conquest of other lands and other peoples around the world for the purpose of extracting wealth and concentrating it into a small number of hands.

When we look at the outcomes of that way of thinking, that somehow that a doctor is somehow separate from a patient or that a farmer is somehow separate from the entire ecosystem that their farm is a part of, we get behavior that might be able to extract a couple of temporary benefits but which, in the long run, inflicts damages on the fabric of the system. The climate and ecological collapse we’re facing shows how Enlightenment-era thinking was not sufficient for an understanding the interrelationships required for healthy living.

People often think of colonialism as being a period in history, of Europeans conquering other lands and wiping out indigenous peoples. But it’s more than that.

When you talk about colonization, often folks of European heritage will say, “well, that has nothing to do with me”. But Europe has been colonized so many times by so many different groups over history, and up to the present day. Look at what’s happening with Russia’s aggression in Ukraine: it’s another example of extractive militarism. This was happening with the Roman Empire, with the Christian subjugation of pagan groups around Europe, and so on. It happened through the enclosure of the commons and the subjugation of women in the creation of the modern household.

It’s important to recognize this because the liberation to decolonize and abolish these violent ideologies is something that we must all engage in to find better ways of being on this planet. Any group that is oppressed, whether you are a woman or a transgender person or an immigrant or a working class person in a capitalist society. Any group that experiences long term social oppression suffers changes to their immune system that make it more prone to diseases of chronic inflammation. With this particular version of colonial capitalism that the world is living under right now, there are intersecting levels of damage, not only socially, but which lead to environmental poisoning and ecological collapse.

So how can we decolonize food?

Well, I think one simple, important way is to decommodify and to take it out of the capitalist market and back to different kinds of markets, markets that existed before capitalism. That’s part of the work we’re doing with the Deep Medicine Circle, which re-frames farmers as the stewards of our health. Not only in how they grow nutrient-dense, delicious foods that are culturally appropriate, but in how they steward the water and the soil to be living vital parts of the ecosystems in which they’re farming.

Farmers as stewards of our health. So in a world where human existence on this planet was truly sustainable there wouldn’t be such a clear distinction between farmers and doctors?

Exactly. Because when the soil is stewarded correctly it sequesters carbon dioxide. The industrialization of farming has damaged our soils to the point where they’re just leaching CO2. This is catastrophic, not only for climate change, but also for the nutrient density of our food. Poor soil is less able to feed the microbes in the soil, meaning the microbes in the soil can’t feed the plants, and the plants can’t provide as many nutrients to us. It’s an understanding of relationships that intact indigenous cultures around the world still understand: A culture of reciprocity and care among all the entities that support the system.

Our collective has several California indigenous community members involved, including Katalina Gomes of the Muchia Te Indigenous Land Trust. She is a Ramaytush1 elder at the farm we are stewarding. Together we reassert the relationality of ourselves as humans to the seeds we plant. They’re our relatives, and we’re bridging the ecological aspects of the farm to the farming methods. There are lots of animals living here too: great blue herons, gophers, red-tailed hawks, dragonflies, rainbow trout and coho salmon.

Historically one of the most important animals in this ecosystem was the beaver, which the colonists killed for fur to make hats. But these beavers were also critically-important ecosystem engineers. Their master hydrology is what prevented this area from burning with the catastrophic fires that we’re seeing right now.

With the beaver gone, the rivers don’t run the same way, which affects the salmon. No salmon means we lose the nutrients they brought up the river from the ocean, and less bears. Losing the bears means losing the pathways they create and their fertilization of the land. There’s all these nutrient cycles that were here for thousands of years that have been missing for the last 250 years. So through working with our indigenous friends we’ve been able to place our work within a wider framework, and view it with a longer lens.

Your family also has a connection with an urban farm in Oakland. What’s the connection between the urban and the rural for Deep Medicine?

Part of our work with the Deep Medicine Circle is bridging the urban-rural gap and creating a corridor in which seeds, knowledge, stories and people can go back and forth. Many of our Black and Brown community members in Oakland don’t have access to places where they can go to in nature and feel healthy and safe. They often feel policed and are looked at suspiciously or told to go away when they travel outside cities. And that means that they don’t have the anti-inflammatory benefit that walking in a forest offers, or contact with healthy soil, or the chance to feel immersion in green spaces.

As well as helping people from the city have access to the country, we’re also stewarding a one-acre rooftop farm in Oakland, which is the largest rooftop farm in the Western United States. And again, it’s not just a habitat for plants, but also for hummingbirds and hawks. The most amazing thing is that there are earthworms up there, on the roof. How do they get there? They come with the soil, of course, but it’s beautiful to watch this habitat become richer as the plants grow, creating a new ecosystem in the sky.

Rupa Marya will be speaking at the conference You, Me, Us: Making a Difference Together, on September 24 at 5.30 p.m. CET, live from the Kyoto Room of the Environment Park in Turin and in streaming online.

1 One the Indigenous Peoples of the San Francisco peninsula.