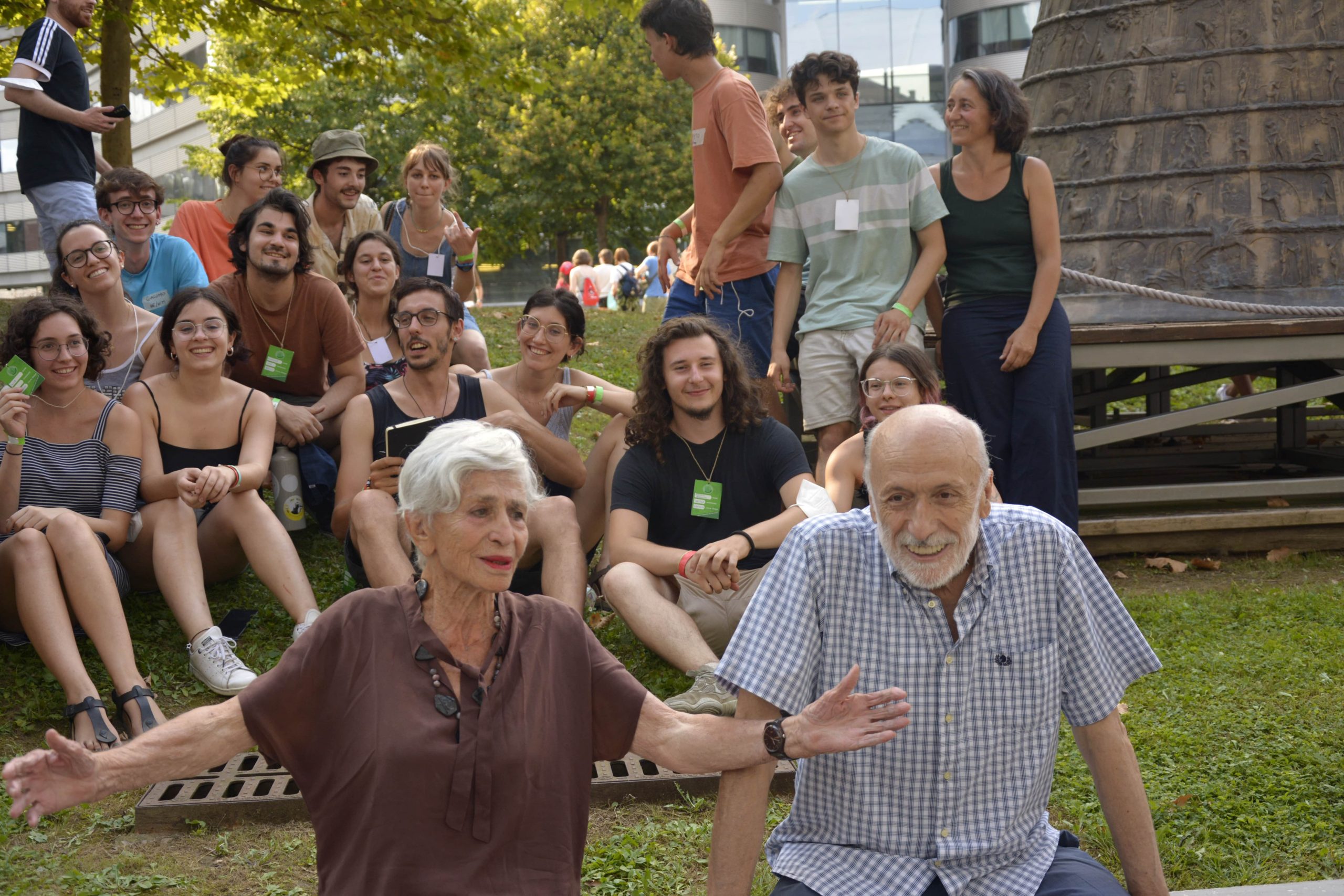 In the fifth in our series of Earth Dialogues, part of our journey toward Terra Madre Salone del Gusto, I speak to an old friend and marvelous role model: Luciana Castellina.

More than just a journalist, writer and politician, Luciana has been a militant activist with whom I’ve shared numerous struggles over the decades. A woman whose life experience has always shown in both words and deeds the true meaning of doing politics.

The dialog between Carlo Petrini and Luciana Castellina was published in La Stampa.

Carlo Petrini Two young people like ourselves were recently invited to speak at the European meeting of Fridays for Future. What do you think of these young people, having been a participant yourself in the World Festival of Youth and Students? At that time the unifying ideology was anti-fascism in all its forms. Today, meanwhile, what unites the Fridays for Future movement is not an ideology, but an undeniable scientific reality.

We must certainly worry about world hunger, but we must also ask ourselves about our methods for fighting it, in order not to perpetuate forms of colonialism in which the Global North defines the rules and rhythms of the world to the Global South. This is a prerogative which all parts of society must embrace, through the active participation of the people. We need a politics of the people.

Luciana Castellina First of all I’d like to recognize the value of this movement, which has helped to raise so much awareness. The worst thing happening in the world is the underestimation of the seriousness of the crises we’re facing. Limiting ourselves just to the ecological question: it doesn’t matter if there are fires, floods or if scientific data shows that the climate crisis is real and getting increasingly worse; we continue to live in a disinterested manner. Take the political debate which we see around our parliament today: there is nobody who is addressing these issues with the seriousness required.

If we continue to feed this model of capitalist development based on the production of consumption of goods, together with the illusion of a progressive expansion of industrialism and social well-being, we’ll seen find ourselves with a terrible social disaster on our hands. We live in a time where there is a total underestimation of the dangers we face by political institutions and consequently, by the whole of society. All of this worries me greatly, because if we don’t enact a radical revolution of our model of development, and very soon, then our very existence on this planet will be threatened. By revolution I don’t mean simply a redistribution of resources, but a stop to the production individual, superfluous consumer good, and more investments in collective services: schools, healthcare systems and the ecological transition are the most vital of these.

Once upon a time we had the chance to choose: the social-democrats went slowly, while the communists were in a greater rush for change. Now it’s clear: or we all enact this change immediately, or we’ll face catastrophic social and environmental repercussions. The young generation is facing a colossal change, and when they’re accused of protesting for the sake of protesting the accusers fail to realize that these movements are doing politics, a politics which is by necessity different to the politics of parliament that these young people do not identify with.

The ecological issue and the silence of global politics

Carlo Petrini What disconcerts me most in this moment is the deafening silence of politicians worldwide regarding ecological issues. A disaster is upon us, and we’re close to the point of no return. This fact should allow for movements to rise from below and for the development of a different political vision. I doubt we can imagine any sort of future without a stronger position being taken by civil society. As the situation is dramatic, we must abandon the riverbed of the ruling class that speaks and thinks only about electoral cycles. Real politics means going among the people to form alliances to change things on the ground. Acting to change the food system, the main culprit in this ongoing environmental disaster (for its production of CO2, exploitation of natural resources, destruction of biodiversity, etc.), can be a starting point to promote a paradigm shift.

If we want to take the ecological transition seriously we can’t avoid a shift from a linear productive model to a circular one. Instead of producing and building new objects, we must learn to repair and rebuild.

If we have the ability to encourage the adoption of more virtuous behavior – a reduction in meat consumption of 50%, the elimination of food waste, and end to plastic packaging – we’ll see that apparently-small individual gestures, if adopted by millions, can really change the world. For me that is politics in the widest sense of the word. We should underline, too, that we’re alive because we can eat and there are millions of people working in the agricultural sector to ensure our food supply.

Post-modern society has created a nostalgic image of this sector, labeling it as an economy for the poor, and rural society is dismissed as something from another century. As soon as a country has enough money it invests them in the secondary and tertiary sectors to encourage so-called progress. As Pasolini said: “The day our country loses its farmers and artisans it will no longer have any history.” And I’d add: nor will it have a future. Restoring dignity to the food system, reconciling it with the environment so that it stops destroying it, and making it fit for purpose for the times we’re living must be a priority for the ecological transition.

Luciana Castellina: Instead of producing and building new objects, we must learn to repair and rebuild.

Luciana Castellina If we want to take the ecological transition seriously we can’t avoid a shift from a linear productive model to a circular one. Instead of producing and building new objects, we must learn to repair and rebuild. This would mean a profound impact on jobs. Just to make one example, metalworkers would not just produce fridges; they’d also have to fix them, too. We need a revolution in the labor landscape accompanied by the birth of small service cooperatives. We need training that teaches peoples skills they need to mend, too.

Agriculture also needs new technologies. This technological development must benefit the lives of farmers, who need internet access, so that they’re able to enjoy their holidays and days off like other workers. But let’s go further. In the transitional phase that we’re living through it is import to institute “basic income for farmers”, a subsidy that pays people who dedicate their labor to caring for the land, thus providing a vital service for all humanity.

Justice is for all, otherwise it’s not justice

Carlo Petrini What you’re talking about is a real social conversion which would have to come about through the recovery of manual skills and artisanship, with the help of new technologies. I think we need to go beyond the erroneous juxtaposition of tradition and innovation, and indeed, the local and the global. These elements are in constant, dialectic contact, showing a different way of living. What Slow Food has done over three decades is to revitalize gastronomic traditions with inherent value. These traditions have been transformed from something nostalgic, for the museum, into a source of pride and engine of development. And this positive tension between between the global and the local is the distinctive characteristic of the Slow Food and Terra Madre network. Thanks to the enormous multitude of small communities acting locally, our movement expresses its global power.

Luciana Castellina I’m convinced of the necessity of the ecological movement, but more generally of activism on a global level; we must get our boots on the ground and transform our denunciations and protests into concrete grassroots action. It’s in the local dimension that we can see more tangible, immediate results. And as Pope Francis rightly says, we must keep an eye on what is happening elsewhere to avoid shutting ourselves off in insular localism. On the one hand this means recognizing the diversity of human communities, but it also means recognizing their economic inequality and capacity to enact change: a town in Western Europe and a town in the Sahel will have vastly different resources and needs.

If we continue to feed this model of capitalist development based on the production of consumption of goods, together with the illusion of a progressive expansion of industrialism and social well-being, we’ll seen find ourselves with a terrible social disaster on our hands.

It’s important to look at the global context, because in our interconnected world justice (be it climate justice, social justice, etc.) is for everyone, or else it isn’t justice. In this regard there’s something that scares me a lot, something which the war in Ukraine has brought back to the front pages: the initiatives to end world hunger, which since they began in the 1980s, have contributed to the destruction of local economies.

In the name of hunger they began to send foreign, culturally-inappropriate food to Africa and Asia, destroying local small-scale food producers. They pushed lots of farmers to suicide, as Vandana Shiva denounced decades ago, as she quit working for the World Bank in protest against the Green Revolution which the bank itself had fomented. The gifts we gave were poisoned: the seeds sent by multinational corporations were sterile, and thus had to be bought year after year by the farmers, putting them into dramatic levels of debt.

We must certainly worry about world hunger, but we must also ask ourselves about our methods for fighting it, in order not to perpetuate forms of colonialism in which the Global North defines the rules and rhythms of the world to the Global South. This is a prerogative which all parts of society must embrace, through the active participation of the people. We need a politics of the people.

This dialog between Carlo Petrini and Luciana Castellina was published in La Stampa on August 4, 2022.