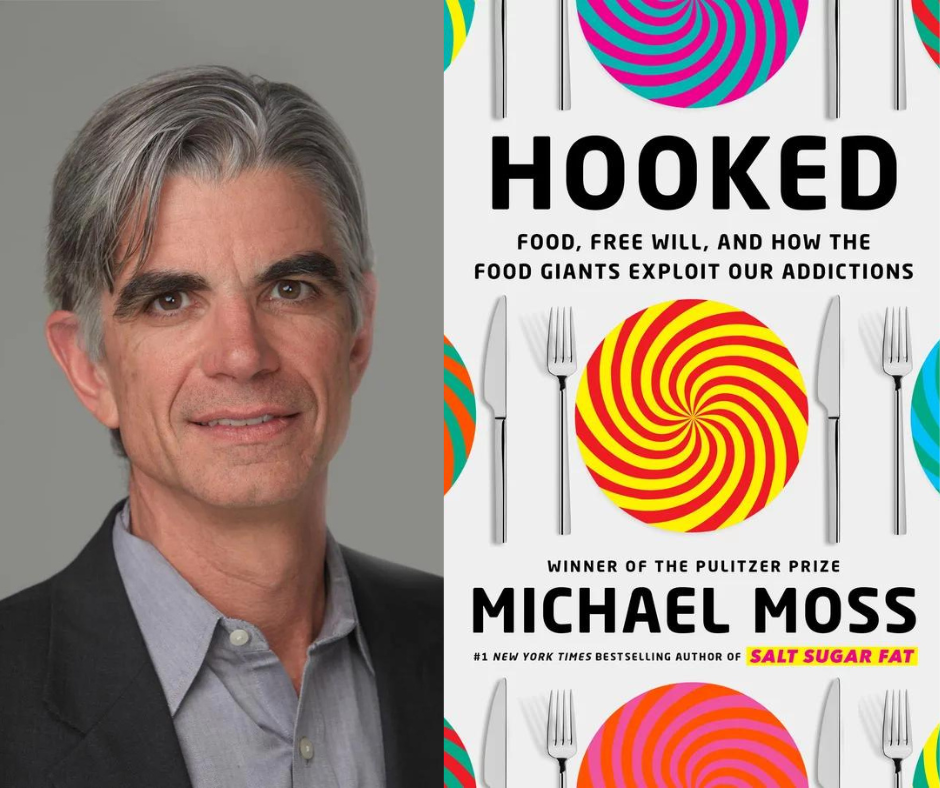 Michael Moss: the meaning of fast and slow

Today we’re talking to Michael Moss, author of two books about the food industry: Salt Sugar Fat (2013), and Hooked: Food, Free Will, and how the Food Giants Exploit Our Addictions (2021).

He’s also one of the speakers at You, Me, and Us, a conference to discuss the impact we can have on the food system through our choices.

We caught up with Michael Moss to discuss packaging, marketing and what both fast and slow food mean.

SLOW FOOD: The Slow Food movement, which organizes Terra Madre, was founded in opposition to fast food culture. But a conception of fast food based on the McDonald’s business model is limiting. There are so many other ways in which our food has become faster in recent decades. And that doesn’t just concern the speed of service in restaurants! What other things should we be taking into consideration when we conceptualize fast food?

MICHAEL MOSS: I came to this idea of looking at food from a standpoint of speed by looking at this question of whether we should be thinking about processed food as being addictive, like some drugs. And at first, I was totally skeptical about that. But now I think these food products are even more trouble for us than smoking and alcohol and even some drugs. Because the memories we develop for food are incredibly powerful; they start an early age and last for the rest of our lives.

But the biggest thing that defines the trouble that we get into with processed food is the speed of our reaction to it. There was a study that showed that cigarette smoke takes 10 seconds to activate the brain. But when they studied how fast we respond to sugar they found the brain reacted in less than one second. The thing with speed is that the faster a substance hits the brain, the more likely we are to react, compulsively, and lose control.

Everything about processed food is designed to maximize speed. It starts with the manufacturing—the dairy industry has figured out how to make processed cheese in a single day. It continues to the packaging where the snack food industry invented these things called the doypack. This is like a wide-mouth package where you can put your hand in and grab a handful of cookies or crackers without paying attention to it, or while you’re doing something else. That also engineers speed into the product.

What do you make of the evolution we’ve seen in the marketing strategies of the food industry in recent years?

We’re kind of in this new third phase with processed food where the industry spent years denying that they were trouble for us. Then they spent years delaying government regulation that might try to level the playing field. And now we’re in this kind of third phase where they’re pretending, in many cases, to do better.

As a result it’s gotten more difficult to walk into a grocery store and really tell what’s good and what’s bad. The processed food industry is really good at fiddling with its ingredients to make it seem like their products are “better” for us. You can see them doing things like adding protein to sugary cereal and then splashing the word protein in big letters on the front of the package. Because there’s some sense that in a certain situation, protein can help us gain control of our eating habits and avoid cravings and overeating.

You mentioned earlier the importance of packaging in our psychological approach to food. Nowadays, in many countries, the colorful packaging of cigarettes is a thing of the past. Could restrictions in fast food marketing be helpful in fighting all the public health issues that fast food creates?

I’m a little skeptical about package labeling. Partly because, I was surprised to find out when writing my last book, it was the food industry itself that invented putting nutrition facts on product labels. It’s a way of lulling us into thinking that their products are less bad for us than we thought before. I think one of the biggest opportunities out there is more on the advertising side.

If we could reduce the food industry’s ability to get celebrities and cartoon characters to sell their products, maybe they then we’d have a chance to make people realize that these ultra-processed foods are not our friends. The advertising of these products by those celebrities, in the case of kids, by cartoon characters, is one the most powerful tools that the industry has in keeping us overly dependent on their products.

Are there any examples of products that you can think of which are really engaging with the public in a positive way? Where they’re telling us what we really need to know about the food, where it comes from, what it contains, what it doesn’t?

There’s a store around the corner from my house that sells fish that is incredibly sustainable. When I walk in the store, they have signs on every item. The name of the boat that caught the fish, where it was caught, the type of fishing methods that were used, why those methods are sustainable.

It’s a really good thing, knowing that you’re paying for line-caught versus net-caught fish. I love this whole idea of the narrative label. My wine store mostly buys from small producers and produces a newsletter where they’re telling the stories of the people making the wine as much as they’re telling us about the grapes and the land and the taste of the wine itself.

The cautionary tale here is that, again, the processed food industry is really good at this stuff too. And so recently we saw these very slick, compelling advertisements on TV describing the life of family farmers who were growing locally sourced potatoes for… guess what? Industrial potato chips. It becomes a selling point. The fast grocery people are looking at what the Slow Food movement does and thinking about all the ways that they can sort of co-opt the same strategies.

The last question is maybe the hardest one. What role do you think the Slow Food movement should be trying to play in this fight for a healthier, more sustainable world?

I’ve been working hard as a journalist to speak to, and be relevant to, not just the people who live in Los Angeles and New York and Portland, Oregon, but also those people in the middle of the United States. Much of the country is a massive food desert where the only access to fresh vegetables is to drive an hour to the nearest Walmart.

I’ve been looking at ways to spread knowledge about what the processed food industry has done to us, and our ability to turn the tables on the industry to regain control over our eating habits.

The people who are more vulnerable to the processed food companies often don’t have the education, or they don’t have the time or the money to spend on food that more privileged people can. So I would love to see Terra Madre focusing a little bit on telling that story of Slow Resistance to the people who are dependent on junk food. We need to find a way to become more more relevant to their lives, given that they are the biggest, broadest audience out there, at least in the West.

Listen to the full version of the interview here:

Michael Moss will be speaking at You, Me and Us, on September 24 at 5.30 p.m. in the Kyoto Room of Environment Park, Turin, Italy. The conference will also be available online for those who can’t join in person.

Terra Madre Salone del Gusto is in Parco Dora, Turin, from September 22-26, 2022. More than 600 exhibitors and a series of workshops, conferences and tastings show how we can regenerate our planet through food. #TerraMadre2022 is a Slow Food event. Free entry.