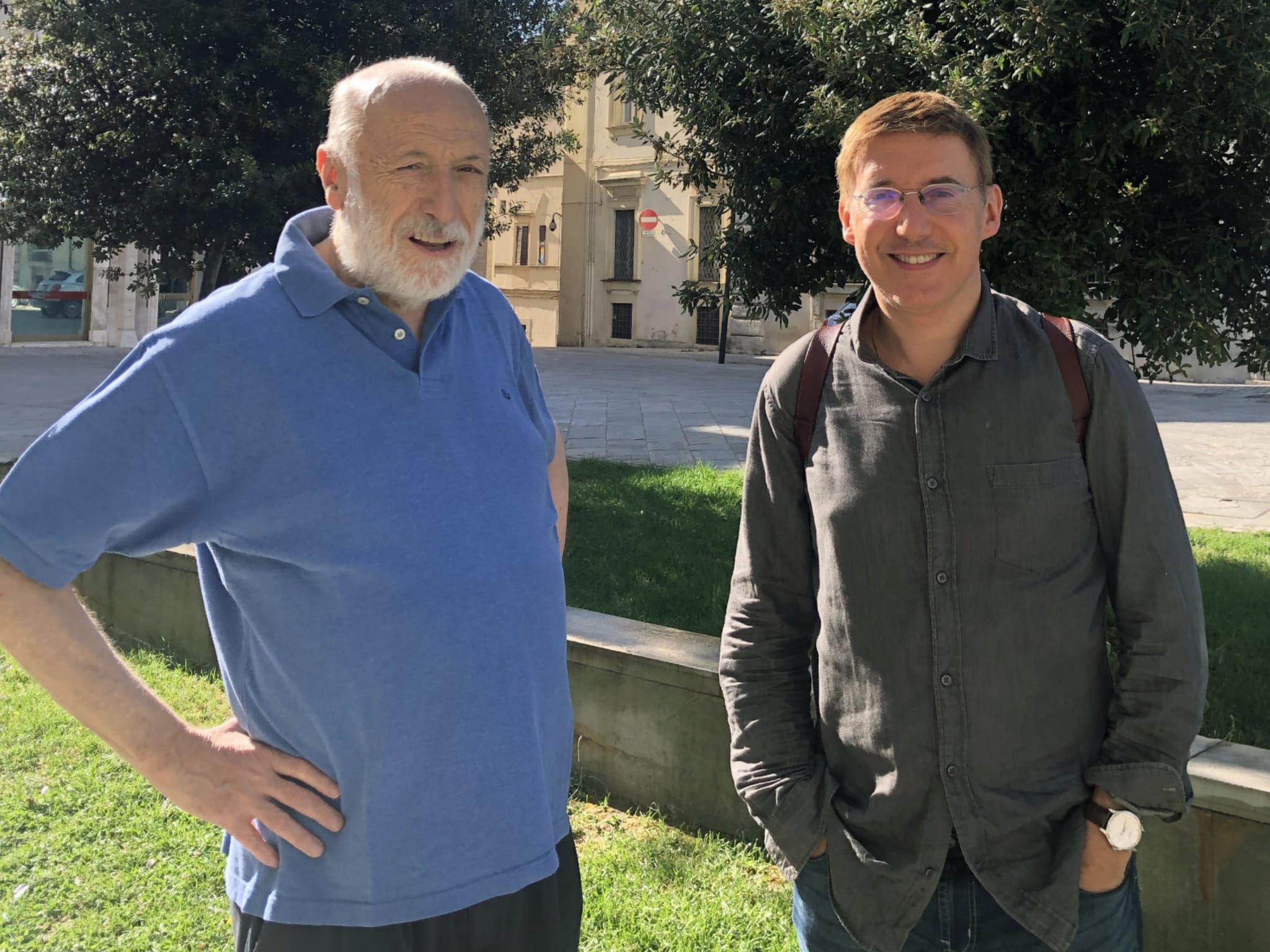 Towards ecological transition – A conversation with Gaël Giraud

The path towards Terra Madre continues as we explore the central theme of manifestation: regeneration. The troubling crises we face should motivate us to regenerate our relationship with nature, to shape new forms of socializing, and to subvert an economic model that is negatively affecting people, especially those in most need.

It will take time to give new life to these aspects. Decades, certainly, maybe centuries, will mark the period of Ecological Transition.

I wanted to speak about these topics with an internationally-renowned French economist: Gaël Giraud, former head economist of the Agence Française de Développement, research director of the CNRS (National Center for Scientific Research) in Paris, Director of the Environmental Justice program at Georgetown University (Washington DC) and Jesuit priest. He published his pioneering book IIllusion financière: Des subprimes à la transition écologique in France in 2012.

Carlo Petrini: Gaël, your path shows how, with will and determination, we can regenerate our own lives. From the world of finance you entered the seminary and dedicated yourself to the transmission of your knowledge to younger generations. This radical life change was not leveraged by personal economic profit. Therefore, as an economist, you are an example of how quality of life isn’t exclusively connected to monetary gain, but that personal development comes from things that embrace you spiritually, sharing, reciprocity… In summary, do you think it’s possible to change paradigms within the current economic systems, in order to bring them towards a less technical, more human dimension? Are there existing models that you think are valid regeneration tools?

Gaël Giraud: During my civil service in the Republic of Chad I was confronted with tough environments where violence and death were commonplace. But the children – those that many would define as the poorest of the poor – that were on the streets every day, taught me how to transmit the true joys of life. And it’s thanks to them that I’ve had what I call my conversion. This experience, therefore, lived through the hell of prison and the vitality of the African streets, allowed me to understand what I should research. Because of this, at 31 years old, when I was offered a highly-coveted job on Wall Street, it took me less than 10 minutes to decide. Choosing the world of finance would have meant betraying the children, those with nothing, who still face every day with the ability to smile, something I’ve never seen in the West. Yes, changing the prevailing economic system will take more time, but it’s possible.

The climate issue is urgent, but politics takes too long to implement concrete solutions. Given the way things are, I think civil society is the real protagonist in the process of trailblazing the ecological conversion. Their organizing capacity can be the Trojan Horse for change, from inside the buildings of power, bringing the fortunes of our tomorrow to the surface.

I want to start with a consideration: the GDP – an index used internationally for the measure of the economic “health” of a state – is a totally false and senseless convention. Just consider how a car accident favors the increase of GDP: the damaged car generates production and labor, the health expenses reinvigorate the economy, etc. We need, therefore, new measures that take into consideration more than just economic growth. For example, the HDI (Human Development Index), adopted by the UN in 1990, that takes into account life expectancy in good health, the education level of the population, the equality of income and the wage gap between citizens. This tool isn’t well-known, and it still is seldom used because it has the power to undermine the economic competition mechanisms between the states that the neoliberal model imposes by its very nature (as funding at the international level is based exclusively on the GDP of each nation).

And yet there is no legislation at the international level that safeguards the use of the GDP; so, if they wanted, it would be very fast and easy to abandon this comparison method. The carbon footprint of companies that operate in any given nation should be taken into consideration too. The climate issue is urgent, but politics takes too long to implement concrete solutions. Given the way things are, I think civil society is the real protagonist in the process of trailblazing the ecological conversion. Their organizing capacity can be the Trojan Horse for change, from inside the buildings of power, bringing the fortunes of our tomorrow to the surface.

The political power of food choice

Carlo Petrini: This is a fundamental point. Today it’s important that every person, every association, every form of gathering is aware of their political power. Slow Food has been searching for 30 years to raise awareness among citizens about the political power of their food choices. From your point of view, what are some concrete actions that can be taken at this stage? And why do politicians not seem to do any of them?

From coal to oil: a question of energy

Gaël Giraud: Let’s start by considering that the Western economic model is formed and transformed parallel to the extraction of natural resources used for energy. All the social transformations of the 19th century are intrinsically-linked to the use of coal, which is very expensive to transport. So, in the 20th century, all the attention was concentrated on the extraction of petroleum, which is transported more easily, together with the neoliberalism that still today weighs heavily on international politics. This direction of thought has created an illusion of infinite natural resources on the one hand and an energy regime that goes hand-in-hand with the political-financial regime on the other. That’s why politics is still so far behind in terms of ecological transition.

The power of everyday actions

The end results of everyone adopting simple measures in their everyday choices are truly meaningful. Reducing meat consumption, taking public transportation, avoiding air travel (above all for short- to medium-haul travel), making the places we live energy efficient, recycling our waste. All of these actions can combat our carbon footprint by 20-25%. And it’s surely a crucial first step to urge politics to take action. But it’s not enough. The other 75-80% of the problem does not derive from the behavior of citizens – but from the choices of economic policy – we must join forces. The mantra, in my opinion, must be: decrease the use of material goods and the growth of intangible aspects. Combining my two souls as a priest and an economist, I say that if we focus our attention on relational goods and the recovery of spirituality, we might discover the path forward to be less tortuous than how it may seem today.

The end results of everyone adopting simple measures in their everyday choices are truly meaningful. Reducing meat consumption, taking public transportation, avoiding air travel (above all for short- to medium-haul travel), making the places we live energy efficient, recycling our waste. All of these actions can combat our carbon footprint by 20-25%. And it’s surely a crucial first step to urge politics to take action.

The path towards ecological transition

Carlo Petrini: I totally agree. And I’ll add that, it’s not that the problems are always more serious and worrying, simply feeling bad about them changes nothing. The ecological transition will be a liberating process, which if shared by all can really bring back true happiness. Through the example of Terra Madre, I know that communities can and do work in this way. Here there is an emotional security that allow us to face challenges with vigor and determination. Your next book will be called “The sweet revolution of ecological transition”; how can we ward off the forces which threaten that revolution?

Defusing the trap of neoliberalism

Gaël Giraud: The trap of neoliberalism tells us that the future will be determined by the public debt that needs to be repaid. This is a way of numbing society. To this, we add the fact that many, especially young people, are starting to feel anxiety about climate change and environmental issues in general. I will never stop saying that what will alleviate our anxiety is taking action. And as you rightly said, taking action together towards a common goal can really be liberating and make us feel that a regeneration can be achieved with joy. The only real decrease we need is that of the natural resource consumption. And the challenge that I’m trying to bring forward is to make it understood at an institutional level that this can mean a consistent increase in job opportunities.

Here’s an example. This year I published a report about energy transition, from now to 2050, in France. What emerges is that this process creates incredible employment opportunities. We’re talking about a net increase of more than a million workers that can go and hold an active role in the path of ecological transition. Similarly, all the actions that are used by reusing and recycling natural resources will create many job opportunities. Therefore, in order to facilitate an ecological conversion that fully respects the teachings of Pope Francis, that is, that intends to heal both the environmental and social issue (linked intrinsically), we can make use of new “green” technologies. We already have the tools, we just have to start walking along that path.

The only real decrease we need is that of the natural resource consumption.

I want to end with a reflection on digitalization. This can be a truly great ally for ecological transition. But be careful of digital tribalization. Technology should be at the service of people, and not the other way around. The greatest risk is the destruction of socializing, because to close oneself in the digital tribe is the same as to stop interacting with the community. This can also be avoided, we just have to want to avoid it.

The conversation of Carlo Petrtini with Gaël Giraud was published in La Stampa on July 21st.

Terra Madre Salone del Gusto is in Parco Dora, Turin, from September 22-26, 2022, with over 600 exhibitors and a series of workshops, conferences and tastings that show how we can regenerate our planet through food. #TerraMadre2022 is a Slow Food event. Free entry.