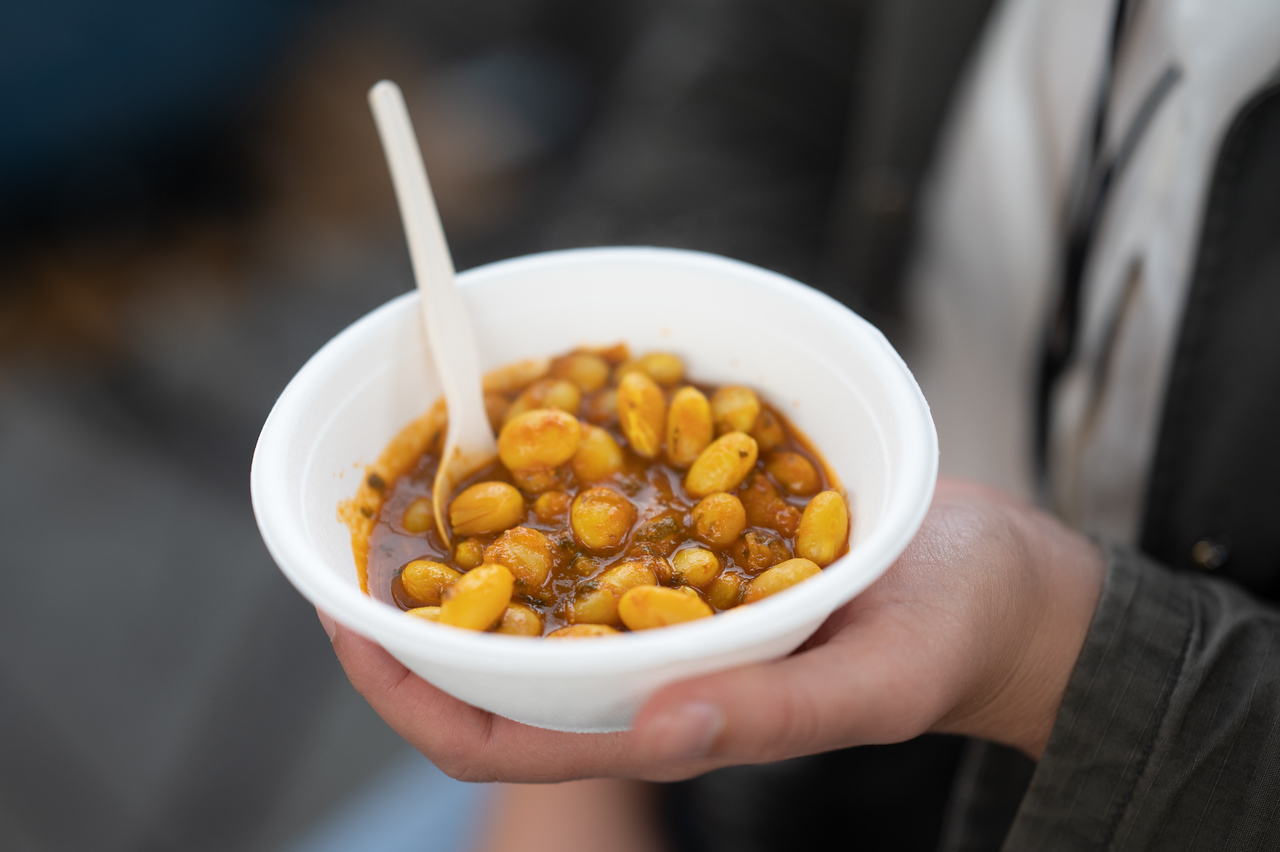 Delegates from Morocco and Burkina Faso show us simple, healthy, local alternatives to the neo-colonialist specter of stock cubes.

Industrially-produced stock cubes were first commercialized just over a hundred years ago in Europe, largely made of salt and dehydrated meat extract. They’re an ultra-processed food product, and are widely available worldwide, having conquered kitchens from Bamako to Bangalore. The reason is simple: they’re a cheap, fast and convenient to add intense flavor to dishes. So what’s the catch?

It’s not just the widely-known health risks from over-consumption of salt which poses a problem when we consider stock cubes: it’s the opportunity cost. The spread of stock cubes produced in just a few standardized flavors by a handful of multinational corporations (invariably from the Global North) comes at the expense of all the recipes and flavoring techniques that have been practiced and passed down from one generation to the next: a heritage of traditional knowledge which adds enormous value to the diversity of human cultures.

At Flavors of Africa, in the RegenerAction space of Terra Madre Salone del Gusto 2022, we heard from two women chefs and educators who are keeping traditional spices and condiments alive.

The first speaker, Fairouz Elagy of Morocco, taught us about chermoula, a marinade used all across North Africa primarily consisting of cumin and coriander, as well as varying amounts of garlic, olive oil and lemon and chili pepper, depending on the region. It’s extremely easy to make, requiring just a pestle and mortar, as well as high-quality fresh ingredients that are beaten into a paste. It can be conserved for long periods of time and is highly adaptable, used to season vegetables, beans and fish dishes, as well as the classic tajine and couscous dishes Morocco is famous for.

Fairouz teaches biology in school, but injects the message of good, clean and fair into her classroom. “I am free to teach in the way I believe is best, and I want to share a message through cooking: most of all that it’s much easier than people think. Chermoula is easy, cheap, fast, simple and very healthy, and that is what I teach all my students. There’s no reason to resort to salty stock cubes!”

We also heard from Franceline Tranagda, who manages a restaurant in Ouagadougou, in Burkina Faso. She is a vocal proponent of sumbala, a condiment made from the fermented seeds of the néré tree. The process of making sumbala is, unlike chermoula, quite long indeed: “It takes three days. First you have to boil the seeds all day, for at least ten hours. They must then be macerated overnight, until sunrise, then beaten with a pestle and mortar. Then we remove the rinds and leave the rest to soak in water for another five or six hours, before boiling them again for three or four hours. We dissect the remaining mixture to create a paste and close it in an airtight container. You leave this container for two days, and on the third day, it’s ready to use.”

Balls of sumbala, once made, can be conserved for long periods of time, even several months, but the traditional method of production has largely disappeared from West African kitchens with the rise of cheap, low-quality stock cubes. Sumbala has several nutritional advantages, besides being an important piece of cultural and culinary heritage: it’s rich in proteins and dietary minerals, as well as being incomparably more delicious!