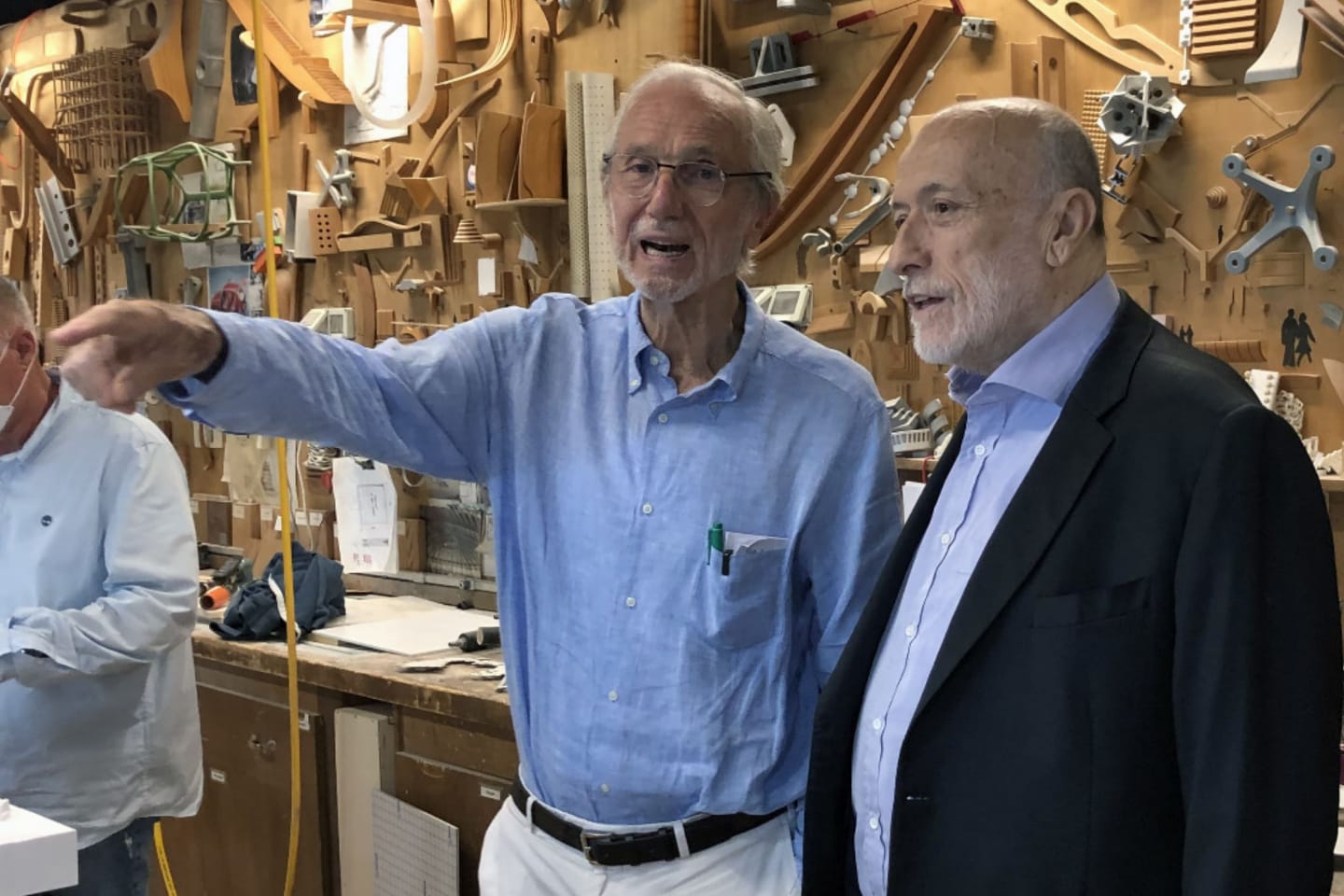 For the next edition of Terra Madre Salone del Gusto we’ve chosen Parco Dora, in Turin, as our location. It’s not in the city center, but a former industrial area whose factories have been transformed into green spaces, a center for socializing and beauty in the capital of Piedmont.

We believe that the regeneration of our social and economic systems can begin with these areas, where community life develops. These areas which, for a variety of reasons, feel ever further from urban centers.

In this second in our series of Earth Dialogues I speak to the man who, in the course of a long career, has been able to re-imagine every form of urban context. His work has, even before aesthetics, considered the ethical and social sphere. Renzo Piano, world-famous architect, has always looked at beauty in a deeper sense, and that’s why his testimony has regenerative value.

The periphery as factory of desire

Carlo Petrini – Let’s start with the theme of regeneration. In this historic period we’re facing challenges which, at first glance, may seem unpredictable or unexpected. But in hindsight, those who were warning us that environmental and social issues deserved to be taken seriously were right. Now we need to change our present in order to ensure a future for our planet. For an architect, regenerating a building sometimes means knocking it down and rebuilding it from scratch; sometimes renovation work is enough. What do you mean by regeneration? And given that we’re discussing this idea in the context of the urban periphery, as you see it, how much does the “periphery” of our cities influence the regenerative processes in our cities, and our world?

The vast majority of people live in the so-called periphery, which are often identified with derogatory names. They may be home to a variety of problems, and it’s pointless to deny it, but I know that there is a lot of beauty in them too; a great potential for growth and desire for improvement. That’s why I like to call them factories of desire.

Renzo Piano The word regeneration reminds me of another term which I use a lot: mending. Every year I select 12 young people and invite them to reflect on the noble art of mending. The idea is to have an impact on marginal areas that need to be reinvigorated to allow their intrinsic energy to emerge.

Today only 10% of people live in big urban centers. The center has become a boutique, a settlement for finance. The vast majority of people live in the so-called periphery, which are often identified with derogatory names. They may be home to a variety of problems, and it’s pointless to deny it, but I know that there is a lot of beauty in them too; a great potential for growth and desire for improvement. That’s why I like to call them factories of desire. The regeneration of economic and social systems, as well as environmental systems, has a lot to do with cities, and therefore, with their peripheries.

At the same time, we should consider those areas which are often considered the “global periphery”. It seems natural to draw a parallel with a project and a person that are both dear to me. Some years ago I received a call from Gino Strada, and he said to me: “Renzo, I need you to design a hospital in Africa that is scandalously beautiful. The scandal being precisely the idea that we bring the highest-quality medicine to the shores of Lake Victoria, in Uganda. Here children from across the world, not just African children, will be cared for free of charge.”

Beyond the passion of Gino Strada, the reason this hospital exists today is because we took the best of that land and restored value to it. The structure is made with local clay, processed to make it more stable, and to have thicker walls, as is done in country houses to give them greater thermal isolation.

So we tried to bring knowledge that could restore value to local resources. That’s a regenerative act, for me. Every district and every geographic area has resources that, if used correctly and through adequate processes, can provide a better future for their inhabitants.

Carlo Petrini What you’re saying makes me think of a key concept both for gastronomy and architecture.  There is no opposition between tradition and innovation, but interaction. An innovation is a successful tradition, while a tradition that is not able to innovate is destined for extinction. I believe that it’s necessary to identify the right types of innovation and the right way o amalgamate them in society. The transmission of knowledge plays a vital role here.

Renzo Piano Exactly. Returning to my earlier example, if we’d used clay-colored cement for the hospital in Uganda we wouldn’t have achieved the same result. And regarding agriculture, products from fields sprayed with pesticides are dramatically different to those that haven’t been subject to any such form of chemical innovation.

And I’ll say more. In a continent like Africa – and indeed, everywhere – professionals cannot afford to develop projects as if they were tourists. And we can’t behave like colonialists either. As Gino Strada said: “You can’t give people fish, but teach them how to fish.” As a builder I try to transmit knowledge that can then be useful in the places I work in, that can be adapted according to their different needs and resources. And the same goes for the food system. It’s just as true in the inter-generational transmission of knowledge, too. Today young people have different resources and needs, compared to our generation, but they also need guidelines.

Our areas of interest – feeding oneself and design things – represent some of the most primitive actions of humanity, and a very similar in a way. But they have something else in common too: we try to share our knowledge. You do it in Pollenzo at the University of Gastronomic Sciences, and I do it with my students too. The people working on my buildings are my students too, in a sense. Because nothing is done alone. When I was young I understood that others had a lot to teach me, and I tried to learn as much as possible. Now is the time to pass that on, and to encourage young people to turn their ideas into reality, where those ideas are realized through sharing. That’s more important than ever today.

The good and the beautiful

Carlo Petrini We’ve talked about beauty and the periphery. There’s no doubt that in your job the idea of beauty is essential. Just as for a gastronome it would be incorrect to speak about food without having a solid concept of what good food is. Yet we consider beauty, and what is good, in a wider sense. What is beauty for you?

Renzo Piano Our two paths are similar because they combine practical, scientific aspects with beauty. I must know my material, how to measure, how to build on a technical level. These are tangible, pragmatic things. Just as in gastronomy we must know what temperature is necessary to cook a certain food, or how to cut it. But we can’t hide that there is an art to feeding people, or to designing buildings. So we must explore the relationship between our techniques, and our society: this is ethics.

If we’d used clay-colored cement for the hospital in Uganda we wouldn’t have achieved the same result. And regarding agriculture, products from fields sprayed with pesticides are dramatically different to those that haven’t been subject to any such form of chemical innovation.

A building, to be beautiful, must reconcile with the way in which it will be used, its purpose, if it will be inclusive or if it will fit within the urban or natural context of its setting. Nothing new, but it’s a concept of beauty that we find in many cultures, including those of the past. In Ancient Greek, in Hebrew and in Swahili the concept of beauty is linked to the sense of being good, and fair. Exactly as you put it in the definition of Slow Food being good, clean and fair food.

Beauty is able to regenerate itself

Beauty is a sentiment that is determined by memory, spirituality, sharing and poetry. Simple meeting rooms or libraries may contain beauty, essentially because entire communities practice the art of living together there, and feel emboldened by them. Listening to music at home in headphones isn’t as beautiful as listening to it live, in concert, with others.

Unfortunately we don’t talk about beauty enough. Perhaps out of modesty, or because we think it’s unattainable. But I’m convinced of one thing: beauty is able to regenerate us as human beings, and as inhabitants of this planet.

The dialogue between Carlo Petrini and Renzo Piano was published in La Stampa on June 23.